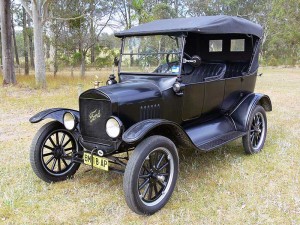 The Ford Model T (introduced in 1908) sold for about $290 without extras. Because it was so simple, it lent itself to becoming the most adaptable car in history. Some of the aftermarket extras included tool chests, rubber hood silencers, tire-patching kits flower vases and clamp-on dash lights.

A farmer could reasonably afford a set of tractor wheels to fit a model T. If he needed to use his car in the fields, he could mount the tractor wheels and hitch up his plow, or whatever.

The car made an excellent power plant. If you jacked up the rear wheel and removed the tire, you could attach a belt from the wheel to your buzz saw to cut wood.

The Model T was the first snowmobile in the 20’s. A special undercarriage was developed, the front wheels were moved to the rear, and each double set of wheels was fitted with steel caterpillar treads. After steel sled runners were attached to the front axle, the snowmobile was ready for the farmers and woodsmen in the deep northern snows.

In rural Pennsylvania at the turn of the century, a group of farmers formed the “Farmers’ Anti-Automobile Society,” (or FAAS as we would know it today) to set down some rules for car owners.

Automobiles traveling at night must send up a rocket (Roman candle) every mile, wait ten minutes (for the road to clear) and then proceed (with caution) while blowing the horn.

If a driver sees horses coming, he must pull over to the side of the road, stop and cover his car with a camouflage cover.

If a horse refuses to pass a car on the road, the driver must dismantle the car and hide the pieces in the bushes.

FAAS members, as well as members of the community were also encouraged to spend Sundays to chase automobiles, shout and shoot at drivers, as well as threaten them with arrest.