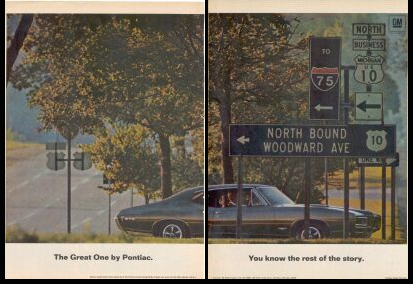 This is probably the most famous advertisement that few people actually saw. The year was 1968. Pontiac was on a roll with its Pontiac GTO advertising with its blend of performance imagery and tiger theme. However, GM management decreed that no division could produce ads that encouraged reckless driving. So how could Pontiac show off the performance of its GTO? They did it by creating the perfect implied ad. The ad looks harmless enough: two men sitting in a Verdoro Green 1968 Pontiac GTO in the crossover median of a road by some trees. The ad copy reads “The Great One by Pontiac. You know the rest of the story.” “The Great One” referred to the GTO but what was the “rest of the story?” The sign behind the car gave the answer. Woodward Avenue in Detroit was the place for street drag racing and was famous nationwide. Therefore, the knowledgeable reader realized that the two men were waiting for someone to race. Unfortunately, GM management saw the hidden meaning too. The ad ran just once, in the March 1967 (?) issue of Motor Trend, before GM Management ordered it pulled. 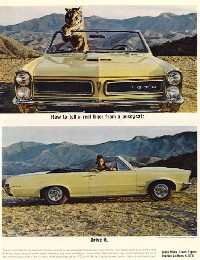 Pontiac had a hit on its hands with its GTO. To really advertise it, they choose a tiger theme. Ads such as this one played with that theme as tigers (real and fake) were shown sitting in, jumping out of, and waiting in the engine bay of GTOs. And it didn’t stop there. Pontiac put out a song, had Uniroyal Tiger Paws tires, and numerous tiger themed toys for kids. Despite all this, the GTO became known by its fans as the “Goat” and the name has stuck with it ever since.