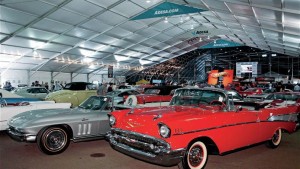 Add the Chevelle to the million-dollar muscle car club. An LS6 convertible sold for over a million dollars on Saturday afternoon, January 23, 2006 at Barrett-Jackson in Scottsdale, Arizona. I had just taken a break from shooting pictures on the block when a buzz rose from the thousands of people outside the big white auction tent. They could see the Chevelle on the giant TV monitors. I could see the wonder and wide-mouthed awe in their faces when the muscle Chevy hit a million. Something grand was happening. The bid kept racing until $1,150,000. If you watched the blue ’70 model (low miles, documented, with drag race history) cross the bidding block over the Speed channel, you were in on the TV excitement. You really get a different feel for the moment when you are there in person. More and more muscle cars are entering the million- dollar club. Somebody (I can’t remember who, it’s old home week out there) told me, “Craig Jackson was disappointed the Hemicuda convertible only brought two million.”

I had to stop and ponder this sale. Now, wait a minute. Another ’70 model production convertible, this one a Plymouth, in a ponycar, not an intermediate, brings almost double the number on the Chevelle and somebody is disappointed?

The difference is last year we saw a Hemicuda convertible fetch three million. Of course, that’s the ’71. The ’71 is just more rare, the last one, and collectors seem to love the different design of the front grille.

Prices were high enough that a restorer, Randy Roberts (Muscle Car Restorations in Owasso, Oklahoma) told me on the phone he was already feeling the effects of the auctions in Arizona before they were over.

“I had a good weekend from that auction. Like 1968s? We had a couple in here. Light details. Cause they’re not bringing any money? Then, all the sudden, oh, well go ahead and do the whole car.”

Randy was referring to muscle Mustangs. A 1968 GT-500 KR fastback sold for over $400,000. But, hey, KRs don’t bring THAT MUCH. That’s not the market. You could say the same about the other ’68 of which Roberts spoke. This was the ’68 Cobra Jet fastback that sold for $475,000. Actually, a green 1970 Hemicuda hardtop, looking concours and perfect, had just pumped up the crowd’s adrenalin with a sales price of $450,000. Next up was the black CJ fastback. The girls on the auction block carried “Hemi Hunter” signs and the auctioneer gave us the quote from the 1968 edition of “Hot Rod” magazine referring to the Cobra Jet as the “fastest running pure stock in the history of man.”

They referred to the conservative 335 horsepower rating, which pushed the CJ down in the Super Stock classes of NHRA, making it a sleeper. I never was clear if this CJ was a ’68 factory drag car (one of 50 built) or a 1968 ½ production CJ (2,870 built). Bidders got exited and bid the Hemi Hunter Mustang to $475,000, or twenty-five grand more than the Hemicuda.

Brent Hajek, famous factory drag car collector from Oklahoma, was wondering about the bidders. Did they fall for “smoke and mirrors?” Although I don’t know exactly why the CJ brought so much, the KR was a 6,000-mile original. You want to know if auction people are knowledgeable? I believe so. Basically, they want the cars and have the money to spend.

B-J and the other auctions in Arizona in January of every year have become the Super Bowl of collector cars. Car collectors get their world championships, so to speak, before the car show season even starts in the spring. B-J is an indicator of trends.

It’s not just B-J setting prices. If you haven’t been to the January auctions in Arizona in four or five years, you are in for a shock. The scene has become so big there are FIVE big auctions staged by Barrett-Jackson, Russo-Steele, R-M Auctions, Silver Auctions, and Kruse International.

B-J is still the really big show. It’s the oldest and grandest. Mainly, it gets the big TV coverage on Speed. The big story for us is B-J is now a place for muscle cars. Ten years ago, Barrett-Jackson was centered primarily on the big heavy hitter classics of the pre-1949 era. Today, muscle cars are the main draw. Wayne Davis is a heavy hitter collector from Southlake, Texas who has been to every B-J auction since 1976. Wayne explained, “Barrett-Jackson used to be the big classic car auction, but now Craig [Jackson] has turned it into a muscle car auction.”

This doesn’t mean that in general muscle has replaced classic cars at auctions. Wayne added, “Rob Meyer at R-M likes to do the big classics. That’s what they’re good at.”

At Silver Auctions, you see a “diverse” collection of cars. David Silver told us, “You can have a ’40 Ford right next to a Jaguar.”

Basically, what has happened is the numbers of cars have become so big in Arizona in January that one sale will not suffice. As the sales multiplied, each auction has taken on its own unique blend of makes and models.

We asked Kruse International’s Dean Kruse, the acknowledged “dean” of classic car auctioneers, “Why there? Why so many sales in January in Arizona?”

He answered, “People want to go there for the winter time. They find excuses to go. ”

The need to get warm and get close to collector cars, which is very difficult to do in ice and snow, has developed into a tradition over the past thirty years. Kruse’s first collector car auction in January in Arizona was 1972, when this Auburn, Indiana-based company owned the sale and Tom Barrett, from Arizona, was their “rep” and Russ Jackson worked for Barrett.

“Later on, he made Jackson a fourth owner, so we had half and they each had a fourth. About ten years later, Jackson left and started his own sale. He had two of them. Then, Tom Barrett got hurt in an automobile accident and about got killed. Russ Jackson visited him everyday for three months in the hospital and they went together. Then, we split.”

In the 1970s, muscle cars were still used cars which got collectible when the gas crisis of ’73 hit. Prices were cheap then. I remember five grand for a Hemicuda convertible. In the mid-1980s, I recall 25 grand for a Hemicuda convertible. That price was incredible. The 1948 and older classics were the cars appreciating radically in value. It was impossible to believe that a production line American muscle car could be worth what a custom-bodied Packard or Lincoln or the king of them all, the Duesenberg, would be worth. But, those times have arrived.

Craig Jackson is a muscle car owner and enthusiast and promotes muscle at B-J. Drew Alcazar worked for B-J and several years ago started his own auction company, Russo-Steele. B-J started Tuesday, January 18th and ran for an incredible six consecutive days. That’s one day longer than last year. R-S started Friday and ran through Sunday. Alcazar had his own “Concours Restoration” shop in Ranch Cucamonga, California in the early 1990s and knows cars. We shuttled between these two auctions, which are 2-3 miles apart. R-S caters to muscle, same as B-J. Muscle car prices were flying here, big time, too, as you can see in the lists. Just click on the links and go to the web sites for the five big sales.

Arizona Biltmore Resort & Spa
2400 East Missouri Avenue
Phoenix, AZ 85016
602-381-7603
www.arizonabiltmore.com
from airport, north on 24th street, go 7.5 miles to Thunderbird Trail, make a right and that wil bring you up to the resort