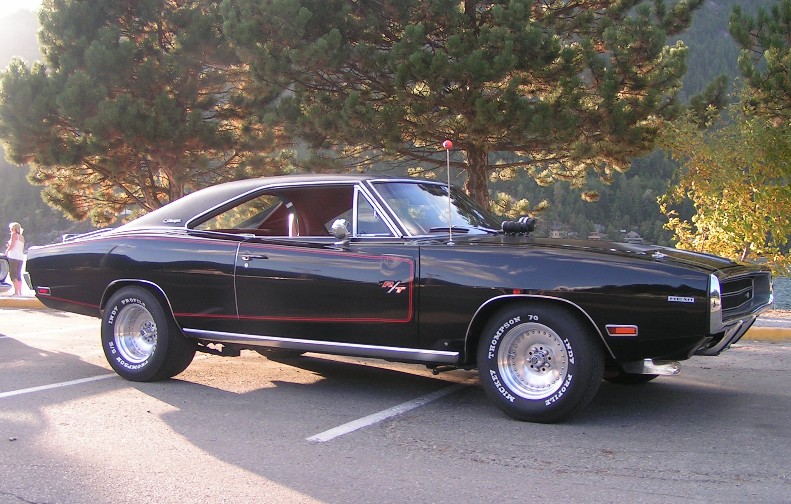 “I woulda bought that car, but I didn’t wear my big pants.” I figured Don Chambers meant the price was so high he needed bigger pockets to accommodate such a wad of cash. Actually, he meant he just didn’t have the room in his blue jeans to hold the cajones he would have needed to make the purchase.

Likewise, moving into the bigger pant sizes, more muscle cars have joined what I call the million-dollar club. It’s astounding. Did you know the Hemi Daytona recently joined this elite club?

Two years ago, Mopar Action asked me to write a value guide for Mopar muscle cars. I’ve written scads of value guides in my career. I got tired of all that work charting and pulling numbers. I told the editor a better article would be one on the ‘Cuda convertible that just brought a million dollars. It was all over the net at the time. In the mag, I told the human-interest story behind the sale.

This million dollar ‘Cuda was the B5 Blue ’71 Hemi convertible sold for the world’s record by Milt Robson (the collector in Georgia). My friend Wayne Davis (Regency Conversions in Ft. Worth, Texas) likes to kid Robson these days about selling that Plymouth so cheap. Last year at Barrett-Jackson, the same Hemi car, which has its pristine original interior, sold for three times that cool million. I am hearing through the grapevine right now of a possible deal shaping up at $10 million for a pair of the ’71 rarities.

Recently, a reader e-mailed saying he’d read my articles in magazines for years on muscle car prices. He wondered if prices were too high and they might kick back. I don’t really know what to tell these people. Barrett-Jackson will be a barometer for prices. I know a ’69 ZL-1 Camaro brought $850,000 at Mecom this past October. That price blew me away. However, I hear the buyer flipped that car for $1.3 million. Voila, we have another member of the million dollar, Big Boy’s pants club. In this case, two people wore their big pants, the flipper and the flippee. (And I thought the stock market was risky.)

I have a caveat on prices at auction. The no-sale stuff doesn’t count. And a lot of auction prices are no-sale, except at B-J where EVERY car is offered at no reserve. What are hardest to track are private sales. There are some ridiculous prices taking place out there. An example would be a B-body Hemi at half a million. I can’t give away the seller or buyer, but it was real. And, guess what? The Coronet was a two-door hardtop, not a convertible. (This one can’t be representative. Can it?)

Prices are hot and heavy across marque lines. Muscle is muscle. Legend is legend. It’s getting so you can’t pick up a 435 horse Tri-Power, 1967 Vette for under $200,000. (We’re talking concours perfection. Please spare me the junk stories. These cars are not turds.)

Okay, I’ll divert to give you a funny one. I have a 289 Cobra and recently entertained a fairly high offer of a half million. A rare automatic car, it was driven by Carroll Shelby at the factory the first three years. I told a friend in town about my car. If you think people in the hobby are surprised by high prices on fast muscle, you should try them on for size to the general population. One man in my little town here couldn’t believe it, so he told me he had an offer of $250,000 on his dad’s ’57 Fender electric guitar, restored, of course.

Cobras and Corvettes are muscle cars, in addition to being sports cars. I know a lot of the muscle car people don’t like to hear about Vettes. Hey, if there’s an L88 under the hood, what’s not to like? What’s not muscle? The 1967 L88 has long been big bucks and joined the million dollar fancy boy’s club long ago. The ’68 and ’69 L88s have hit in recent years because at $125,000 they had been passed by a hoard of other muscle cars. In other words, it was the muscle car market that moved these beasts up in price ($375,000 recently on a private sale), not the separate Vette market.

So, back to our original question about the prices being so high that what was an ordinary, working enthusiast to do? Basically, he must deal in higher production muscle cars. One would be a Z/28, say, which is extremely popular. But wait. The ’69 Z/28 coupe sold at Mecom, which had an added cross ram (not original) and which wasn’t a JL8 car, sold for $130,000. That’s pretty steep on a blue-collar muscle car of higher production.

What’s considered rare, number-wise? The ’69 Hemi Charger Daytona is rare. Dodge made 29 with 4-speed and 75 with automatic.

The rich guys want what other enthusiasts can’t have. They want the hottest of the hot, in horsepower terms.

The million-dollar muscle club is expanding. Roger Gibson (Roger Gibson Restoration, Scott City, Missouri) says the reason these muscle cars are so high is, “They are so rare when one comes up for sale, if you want it; you have to pay what they want.”

If you have a muscle car pricing story to tell, drop me a line at [email protected] Or, if you have a rare muscle car to sell or you want to buy one, let me know. I will keep your information confidential, as you like so as not to lose a source. Let’s have fun telling the stories of these great cars that are rising in price as the Duesenbergs and big custom classics of the 1930s have done.

A hunting we will go…