Introduction: The Buick Wildcat was arguably Buick’s first performance car, although it was more a luxury sports coupe than all out performance. Nevertheless, it began Buick’s quest for power and even lended its name to several Buick engines of the mid sixties. 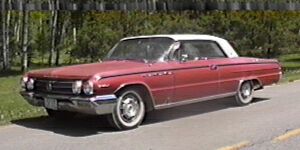 Comments: The first Wildcat (officially named the Wildcat Sport Coupe) was part of the Invicta line, but included front bucket seats, a console, tachometer, and a rear floor lamp. It’s body style was classy and attractive. Buick engineers adjusted the suspension to improve the handling of the Wildcat. Highlights included a frame which carried boxed cross-members with heavy side rails, coil springs on all four corners, and oversized 10 inch drum brakes. Sporty yes, but light, no. The Wildcat weighed in at 4,150 pounds. Standard power was the Buick LT401 cid V8, rated at a strong 325 bhp. Although this engine was also available in the regular Invicta line, the Wildcat came with a standard 3.42:1 rear end. A 4.45:1 rear end was optional for those wanting even more drag strip performance. Marketed as a “family-sized sports car”, approximately 2,000 were sold.

Comments: The Wildcat received some new styling changes for 1963. The name was scripted on the rear fenders, within the rear cove, and across the front of the hood. A custom grille adorned the front. Under the hood, the 401 cid V8 rated at 325 bhp carried over. But the big news was the expansion of the Wildcat line to three models: Model 4639 (the four-door hardtop), Model 4647 (the two-door sport coupe), and Model 4667 (the two-door convertible). Although Buick tried to play up the performance image of the Wildcat, the 4 door model outsold the other two by a wide margin. 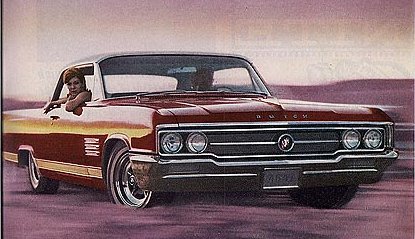 Comments: Buick continued to support the Wildcat, calling it “the next best thing to owning a Riviera.” More importantly, the carryover standard 401 cid V8 rated at 325 bhp was joined by two optional engines, a 425 cid V8 rated at 340 bhp and the top of the line 425 cid V8 rated at 360 bhp. The extra performance was needed as curb weight was now 4,500 lbs. The suspension was further upgraded and included a link stabilizer bar and a semifloating rear axle using a three-bar link with a track bar. A posi-track rear axle was optional. A fourth model, Model 4669 (the four door sedan) was added, which somewhat diluted the Wildcat’s performance image. But sales continued to increase.

Comments: The engines carried over for 1965, but the Wildcat received all new styling, as its sheet metal was now shared with the LeSabre. The Wildcat still continued with a unique grille and badging. Buick went crazy on the models, expanding the Wildcat lineup to ten models, five sedans and five coupes.

Comments: The Wildcat was basically unchanged for 1966 except for the addition of the Wildcat Custom. This included extra niceties such as a deluxe steering wheel, padded armrests, plusher seat materials, and custom bucket seats. But of greater interest to performance fans was the addition of option Y48, the Wildcat Gran Sport Performance Group. For $381.01 over the cost of the 425 V8 360 bhp engine, the package added a high performance 425 cid V8 with a pair of four barrel carbs, a chrome-plated air cleaner, cast aluminum rocker arm covers, dual exhaust, heavy-duty suspension, Posi-Traction rear end, and 8.45×15 inch whitewall tires. This engine (also known as A8 or the Wildcat 465) was good for 380 bhp and 465 lb-ft of torque. This was certainly a rare option as only 21 were believed to have been produced. This would be the only year for this option. Overall Wildcat sales were up, as 68,584 total units were sold.

Comments: The Wildcat received an all new 430 cid engine for 1967. This engine featured 10.5:1 compression, hydraulic lifters, a giant four barrel carb, and was rated at a strong 360 bhp. Much of the added power came from a domed chamber design that greatly increased the efficiency of the engine.

Comments: The Wildcat got an all new look for 1968, with a new grille design and new body side moldings. The Wildcat was still offered in both standard and plusher Custom models.

Comments: The Wildcat continued virtually unchanged for 1969, with the exception of a new grille design with vertical texturing. The Wildcat differed from the LeSabre only in the grille and a broad rocker molding with fender extensions and wheelhouse moldings. The standard equipment was the same for both the LeSabre and the Wildcat, although the Wildcat did come with a unique steering wheel.

Comments: 1970 was the last year for the Wildcat, but it went out with a bang. The standard engine was Buick’s all new 455 cid V8, rated at 370 bhp and a earth shaking 510 lb-ft of torque. This new engine had a 10:1 compression ratio, a cast iron block, hydraulic lifters, five main bearings, and a four barrel carburetor. But in the end, the Wildcat was too similar to the LeSabre on which it was based, and sales dropped considerably. The Wildcat would vanish at the height of its performance.