by musclecarclub
in Muscle Cars, Uncategorized
0

Introduction: The Chevrolet Chevelle SS represented Chevrolet’s entry into the hot midsize muscle car battle. The Chevelle SS was the high performance version of Chevrolet’s Chevelle, and had its own line of engines and performance equipment. At first caught napping with just a 327 V8, the Chevelle SS would soon sport powerful 396 V8s and eventually the most powerful rated engine in muscle car history, the LS6 454 in 1970. The Chevelle, along with the Pontiac GTO, remains one of the most popular cars from this era and with good reason. Its strong performance at a reasonable price made it popular on the street and at the track. 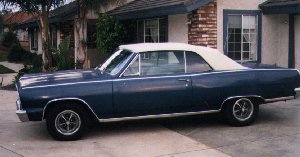 Comments: The 1964 Pontiac GTO caught Chevrolet napping. While the GTO offered 389 cubic inches in its midsize A body, Chevrolet only had a 327 V8 that put out 300bhp. That gap would soon disappear. 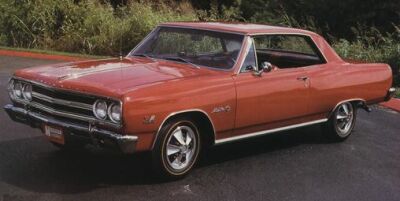 Comments: Tired of falling behind Pontiac, Oldsmobile, and even Buick, Chevrolet got serious for 1965. Although the familiar 327 was now offered in 350bhp tune (L79), the hot Chevelle SS for 1965 was the limited edition 396, known as the Z-16 package. Only 201 of these 375bhp bruisers were made (200 hardtops and 1 convertible). All had stouter convertible-type frames, beefed up suspensions, front and rear anti-roll bars, and faster power-assisted steering. A Muncie 4-speed with axle ratios as high as 4.56:1 were available instead of the standard 3.31:1 gears. With 56% of the vehicle’s weight over the front wheels, handling and braking was subpar. It would take another year before the 396 would become available to the masses and the Chevelle SS was transformed into a true muscle car. 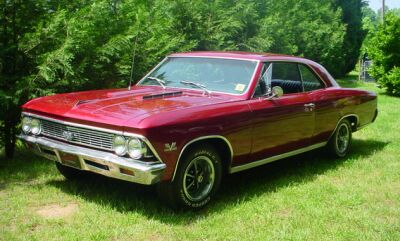 Comments: With 400 cubic inch engines available in its sister divisions, Chevrolet made the 396 engine standard in the Chevelle SS. But instead of the 375bhp version available the year before, the base 396 only put out 325bhp. Also available was the L34 396 engine which featured a taller cam, a stronger block, and larger four barrel. The limited edition Z-16 with its 375bhp 396 engine was still available. Later in the year, Chevrolet released the L78 396, which shared the Z-16’s 375bhp rating but had solid lifters and new exhaust manifolds, the 427’s large valve heads, 11.0:1 compression, aluminum intake manifold, and an 800-cfm Holley. All Chevelles used stiffer springs and shocks to correct their handling problems, but their performance still was subpar. The 1966 Chevelle SS was renamed the Chevelle SS396 to represent its standard 396 engine and separate model status. It was also redesigned, with a new bumper, a new roof line with a recessed rear window between the sailing roof panels. Two simulated scoops, which would become a SS signature, was introduced this year. The exterior remained all business, especially with its standard red line tires and small (dog dish) hub caps. The crisp styling, tractable engines, and low prices made the Chevelle SS a good deal. 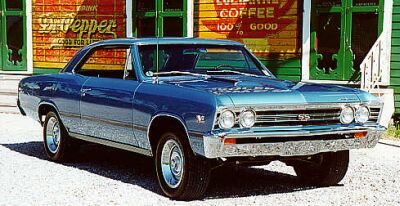 Comments: 1967 saw several improvements in the Chevelle SS and a major step back. Road manners and driveability were improved with more aggressive tires, newly available front disk brakes, and new 14 inch wheels. A three speed automatic joined the available three and four speed manuals and two speed automatic transmissions. The styling was revised slightly with a new reworked bumper and a new blackout tail panel. The hood louvers remained non-functional. The 325bhp 396 remained the standard engine, but the L34 engine upgrade lost 10bhp to 350bhp to meet GM’s corporate edict against any car except the Corvette having more than one bhp per ten pounds of curb weight. The 375bhp 396 disappeared as a factory option, but approximately 612 were dealer installed.

Comments: 1968 saw a major redesign of the Chevelle SS. The wheelbase was shortened by three inches and gained new styling. The hood was stretched out and the deck was shortened. The recessed rear window was converted into a fastback look and the rear side windows were given a “V” look. The front end gained a rakish design with bold sweep back lines that extended from bumper to bumper. The 396 returned in 325bhp and 350bhp tune and were joined once again by the 375bhp L78. Axle ratios ranged from 2.73:1 to dealer installed 4.88:1 drag cogs. The SS396’s suspension was still a sore spot, and customers also complained about the shifting of the Muncie four-speed.

Comments: For 1969, the SS 396 became an option package on all Chevelles. Therefore, it was possible to order the SS 396 package on everything from the Malibu sport coupe (the most popular) and convertible to the Chevelle 300-series hardtop and pillared coupe and the El Camino pick up. All Chevelles got new styling which included new tail lamps. The 396 returned in 325, 350, and 375bhp tune but still suffered from poor handling and four-speed linkage. Late in the 1969 model year, the 396 was bored out to 402 cubic engines, reportedly to meet new emission standards. The official name and power ratings were not changed and the Chevelle SS remained one of the most popular muscle cars of the era. Of particular interest to drag racers was the availability of a number of limited edition Chevelles. Known as COPO Chevelles, these Chevelle’s were specially ordered from the factory by certain dealers or well- connected customers with standard L72 427 V8s rated at 425bhp. An estimated 323 Chevelle COPO 427s were built, all of which were often devoid of badges or other indications of the power that resided underneath.

Comments: 1970 saw the introduction of the most powerful Chevelle SS of all time. Responding to the lifting of GM’s ban on engines larger than 400 cid in midsize cars, Chevrolet responded by dropping in a new 454 cubic engine into its Chevelle SS. The entry level 454 was known as the LS5 and packed 360bhp. The top engine choice was the LS6 version with 450bhp. The LS6 had a 800-cfm Holley four barrel on an aluminum manifold, 11.25:1 compression, solid lifters, four-bolt mains, forged steel crank and connecting rods, forged aluminum pistons, and deep-groove accessory pullies. No production engine ever had a higher factory horsepower rating. The standard Chevelle SS 396 continued with its 402 cid engines, although the 325bhp was dropped and the 350bhp version was now standard. Optional on both the 396 and 454 was a new cowl-induction hood, which had a rear facing flapper near the base of the windshield to feed air into the engine. The styling was new with a “vee” front end, functional hood pins, and five-spoke Rallye wheels. This was truly the pinnacle of the Chevelle SS performance. 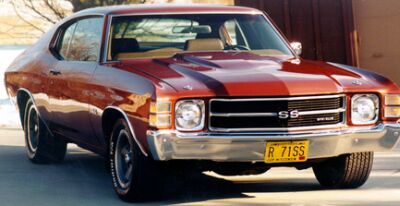 Comments: 1971 saw the collapse of muscle car performance. In response to GM’s edict that all engines ran on unleaded fuel and to meet ever restrictive emission standards, Chevrolet detuned all its engines and introduced two new entry level engines. The standard engine was now a 350 V8 two barrel that put out a meager 245bhp through a single exhaust! Also available was a 350 V8 four barrel that put out 270bhp. The 402 engine that was previously still known as a 396 was renamed the “Turbo Jet 400” and offered only 300bhp, down from 3500bhp. The 375bhp version was no longer available. The LS6 454 was also killed, but the LS5 454 returned with 365bhp, an increase of 5bhp from 1970. All Chevelles got the new single headlight design from the Monte Carlo and could be optioned with hood stripes and the cowl induction hood. Interestingly, only the LS5 carried external engine ID; they carried “SS 454” badges. All others only said “SS.” That was a pretty revealing sign of the times.

Comments: 1972 saw further dilution of the Chevelle SS. Now the SS package could be ordered on any V8 Chevelle. Thus it was possible to have a Chevelle SS with a 307 V8 that put out a meager 130bhp net. GM decreed that all engines had to be reported with their net engine ratings, which resulted in several sharp decreases even though engine power was not necessarily changed. The 350 V8 dropped to 175bhp, the 402 to 240bhp, and the 454 to 270bhp. These were sad times for performance fans indeed.

Comments: 1973 was the last year of the Chevelle SS. Product dilution reached its lowest point and the SS package was technically available on the Chevelle station wagon. The 1973 Chevelle was completely redesigned and the engines were further detuned.