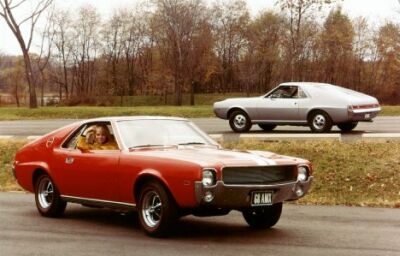 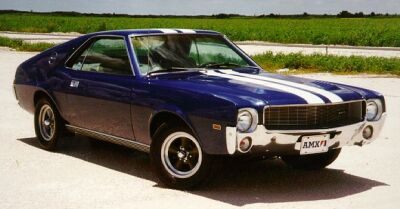 Comments: The AMC AMX debuted on Feb. 24, 1968, as a mid 1968 model. It was the first steel-bodied, two seat American production model since the 1957 Ford Thunderbird. American Motors created the AMX (American Motors Experimental) by slicing a foot out of its Javelin body, eliminating the rear seat, and making it a true two seat sports car. Its short 97 inch wheelbase cut the AMX curb weight to about 3,100 pounds.

Standard equipment on the AMX included reclining bucket seats, carpeting, woodgrain interior trim, E70-14 Goodyear polyglas tires, a four-speed manual transmission, and a heavy-duty suspension. Engine options were based on the corporate 290, 343 and 390 cid V8 engines with power ranging from 225 bhp to 315 bhp. Base price was a reasonable $3,245. In February 1968, race driver Craig Breedlove set 106 world speed records with an AMX. To celebrate this feat, about 50 special red, white, and blue “Craig Breedlove” editions were built. 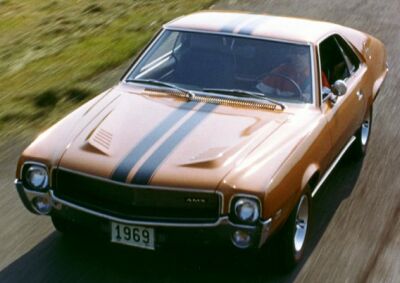 Comments: There were few changes to the AMX for 1969. The base price increased by $52 and a new 140 mph speedometer was included in a new dashboard, which included a hood panel cover. A special series of “Big Bad AMX” were built mid year. The “Big Bad AMX” option cost just $34 and included wild (at least for AMC) colors with body colored bumpers. The “Big Bad AMX” was available in orange (284 units), Green (283), and Blue (195).

A Hurst Competition Plus shifter was announced at the same time for the Borg-Warner four speed manual transmission, a $205 option. All engine choices carried over starting with the base 290 cid V8 rated at 225 bhp. For a mere $45 more, the buyer could add the 343 cid V8 rated at 280 bhp and the top of the line 390 cid V8 rated at 290 bhp for just $123 more. Also optional and very desirable was the “Go Package” costing a mere $233 on the 343 engine and $311 on the 390 engine. The “Go Package” included E70 redline tires on six-inch rims, a handling package, power disc brakes, Twin-grip differential and visually identifying over the top stripes.

Also available was the limited (only 52-53 built) AMX SS examples sent to Hurst for legalization as drag racing cars. The 390 engine was topped by a pair of 650 cfm Holley four-barrels on an Edelbrock aluminum cross-ram intake. Doug’s headers and other modifications resulted in a conservative advertised output of 340 bhp. The suggested retail price of $5,994 was nearly twice the regular sticker price of the base AMX.

Comments: The MSRP for the 1970 AMX increased to $3,395. For the added money, the buyer got a standard 360 cid V8 rated at an impressive 290 bhp. The front end and taillamps were also completely restyled. Atop the hood was a Ram-Air induction scoop. This would be the last year for true two-seat AMX production. 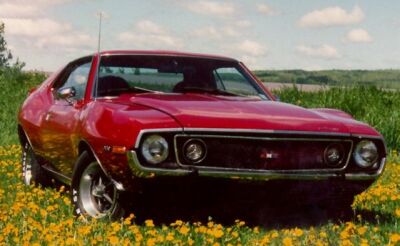 Comments: The two seat AMX ended in 1970 as the 1971 AMX was now technically the top of the line Javelin. The new AMX shared the four-seat Javelin’s new swooping, bulging appearance and styling with “humped” front fenders and a rear-facing cowl hood. Also standard were high-back bucket seats, a center console, slot style wheels with fat tires and a rear spoiler. Engine options started with a 360 cid V8 with two-barrel carb rated at 245 bhp. 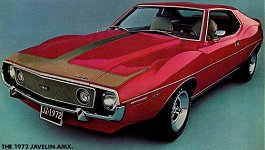 Comments: 1972 saw small styling changes, including a specific grille which matched the center-bulge horizontal blade pattern for 1971. This year’s base engine was a 304 cid engine, with only a 8.4:1 compression ratio and was rated at a mere 150 bhp. Still available were the 360 cid and 401 cid V8 engines. Torque-Command automatic transmission, with floor shift, was optional on any engine, and a four speed manual transmission was optional on the 360 and 401 engines.

Still available was the “Go Package” with its standard 401 engine and functional cowl-induction hood. Although the AMX would technically continue to 1974, this was the last year for muscle car engines and muscle car performance.