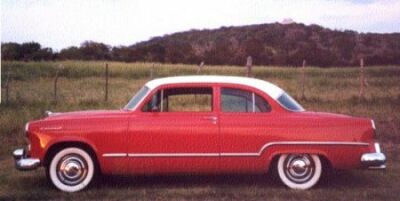 Comments: The Dodge Coronet underwent a tremendous change for 1953, including all new styling, an updated, downsized chassis (in two sizes), and most importantly, the Red Ram V8, which initially came standard in the top-line Coronet. The 241.4 cid V8 was of a hemispherical head design, just like the Chrysler FirePower, only in a smaller size. With a two-barrel carb and regular gas burning 7.1:1 compression, the Red Ram produced 140 bhp – which was pretty good for 1953.

The styling was rounder and smoother, and updated the old-looking 1949-52 body and finally integrated the rear fenders into the rest of the body. Two and four door sedans came on a 119 inch wheelbase, down 4.5 inches from 1952, and the two-door hardtop, convertible and two-door station wagons came on a 114 inch wheelbase, an inch shorter than the earlier low-priced Wayfarer models. It didn’t take stock car racers very long to recognize that more power in a shorter, lighter body was good for racing, and Dodge scored six NASCAR Grand National wins in 1953. The Diplomat two-door hardtop was priced at $2,361 and 17,334 were sold. The Diplomat convertible cost $2,494 and 4,100 were sold. Both came with the Red Ram V8 standard and launched Dodge performance.

Comments: The Dodge Coronet received a minor face lift for 1954, and horsepower on automatic transmission cars was increased to 150. A Dodge Coronet convertible was the pace car for the 1954 Indy 500 and 701 replicas were built.

Comments: The Dodge Coronet was used as the basis for Dodge’s version of MOPAR performance. Unlike the other Chrysler super cars (Plymouth Fury, DeSoto Adventurer, and Chrysler 300B), the new Dodge Coronet D-500 was visually indistinguishable from normal Dodges upon which it was based. The only external clues were discreet, crossed checkered flags and “500” lettering on its lower rear deck. The D-500 option (named for the NASCAR requirement that 500 identical models must be produced in order to be raced) was also available on any Dodge model, including station wagons and two door sedans. The D-500 option included a 315 cid V8 with hemispherical heads (unlike other Dodge V8s which used polyspherical heads), a unique camshaft, valve lifters, pushrods, carburetor, ignition, and pistons. With a compression ratio of 9.25:1, four barrel Carter WCFB carburetor, and dual point distribution, peak horsepower was 260 bhp while torque was a solid 330 lb-ft. The D-500 came with a standard three-speed heavy duty manual transmission. The optional Powerflite push button automatic transmission had a kick down feature. A 3.73:1 rear axle ratio was standard, but several others were optional. The D-500 also received an upgraded suspension with very stiff front coil springs with heavy duty Oriflow shock absorbers, with the same valving specified for Dodge police cars, were mounted in the springs. Similar units were used in the rear. A sturdy 0.8125 inch high rate stabilizer bar was also installed. Overall height of the D-500 was 1.5 inches lower than its standard Dodge counterpart. The D-500 came standard with 15×5.5 inch wheels with 7.60×15 inch tubeless tires. Optional were heavy duty 15×6.5 inch wheels. DeSoto/Chrysler 12 inch diameter drum brakes were used in the D-500, providing a total effective bracking area of 251 square inches, compared to 173.5 square inches on regular Dodges.

An even hotter version of the D-500, the D-550-1 was intended primarily for NASCAR competition. The D-550-1 had an even stiffer suspension than the D-500. Under the hood, the engine received larger valves (about 18% larger), a full-race cam shaft, and a double log intake manifold that used two four barrel Carter WCFB carbs. This all added up to 285 bhp.

Comments: 1957 saw the debut of the new D-501, which replaced the D-500 from the year before as the top Coronet. The D-501 received Chrysler’s proven 354 cid Hemi V8, which were actually left over engines from the 1956 Chrysler 300B production. Camshafts from the 1957 Chrysler 392 cid engines were installed in the 354 V8s for added kick. Topped with a pair of Carter four barrel carbs and sporting a 10.0:1 compression ratio, the new engine put out 340 bhp. Other changes included the addition of the Torsion-Aire Ride (torsion bar) front suspension and a heavy duty suspension with heavy duty shock absorbers and a heavy duty leaf sprung rear. A 3.73:1 rear axle was standard with the three-speed manual transmission, but automatic cars received a 3.18:1 rear axle. There were 13 optional rear axles available, ranging from 2.92:1 through 6.17:1. The D-501 received 7.60×15 tires wrapped around 15×8 inch wheels. Brakes were impressive 12 inch diameter drums. Only 101 D-501s were produced.

Comments: The Dodge Coronet was reborn for 1965 as Dodge’s midsize entry. From the start, the Coronet meant performance and was available with the full race 426 Hemi, seriously under rated at 425 bhp (most estimates are 550-600 bhp). But the Race Hemi was a little too uncivilized for most amateurs and few were sold.

Comments: 1966 saw the introduction of the Street Hemi, and the Dodge Coronet was the perfect showcase for it. The Street Hemi was made more manageable by installing a hydraulic lifter cam and a 10.25:1 compression ratio. It was rated at the same 425 bhp as the Race version and cost less than $500 more. Only 340 Coronet 500 Hardtops received the Hemi engine (204 of them four speeds), along with 21 convertibles (12 with four speeds). Another 379 Coronets also had Hemis. 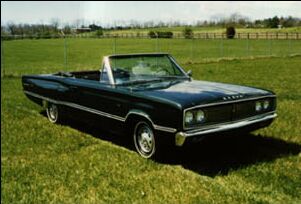 Comments: The Dodge Coronet was face-lifted front and rear for 1967. Simulated air vents and racing stripes were added to the body sides. Mag-style wheel covers were new, while bucket seats and a console remained standard. New for 1967 was the Coronet R/T (Road/Track), which was the performance model that was equally at home on the road and on the track.

The Coronet R/T 2 door hardtop was priced at $3,199 and the R/T convertible at $3,438. Standard was the new wedge-head Magnum 440 cid V8. With a four barrel Carter AFB carb, it was rated at 375 bhp. A TorqueFlite automatic was standard and a four-speed manual gearbox was optional. Also standard on the R/T was 7.75×14 red stripe rubber, heavy-duty shocks plus torsion bars and leafs, stronger brakes and a front sway bar. The Coronet received a Charger-like grille, but lacked the retractable headlights of the Charger. A non-functional hood scoop, R/T badging, and front bucket seats added to the performance image. If that wasn’t enough, buyers could order the mighty 426 Hemi for just $457 more. Only 238 Hemi Coronets were produced, including 2 convertibles, of which 102 had the TorqueFlite transmission.

Almost all Hemi Coronets were R/T models, but a few Hemi powered Coronet 440 two door hardtops snuck out of the factory. These were built to meet National Hot Rod Association Super Stock B rules and the WO23 cars, as they were known, were the latest in a line of special lightweight models for drag racing. A Street Hemi Coronet 440 tipped the scales at 3,686 lbs, resulting in a power to weight ratio of 8.67 lb/bhp. The body had standard sheet metal with a big fresh air scoop. Sound deadening and body sealer was deleted and the battery was mounted in the trunk. The usual sway bar in front was also deleted, as these models didn’t really need to turn that much. There were two versions. The first came with a TorqueFlite modified with a 2,300-2,500 stall speed torque converter and 4.86:1 Sure-Grip Chrysler built 8 3/4 inch differential. The second had the four speed manual transmission with Hurst linkage, reinforced gearing and clutch, and explosion-proof clutch housing. A 4.88 Sure-Grip differential was also included. The SS/B cars did not come with a factory warranty. Fifty examples needed to built and when 55 were built, Dodge pulled the plug. Plymouth also built 55 similar Plymouth Belvedere II two door hardtops (RO23). These were the ultimate Coronets. 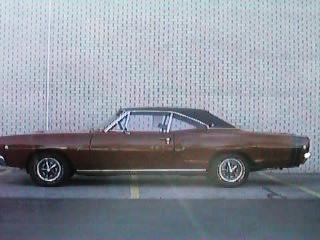 Comments: The Dodge Coronet was restyled for 1968, and the rounded, Coke bottle-inspired lines of the new models made the 1967 models appear dated. Also, the R/T badging was shared with the more attractive Charger, leaving the lower priced Coronet a bit in the shadows. At mid-year, the introduction of the even cheaper Super Bee provided even further internal competition. But the Coronet continued on with standard bucket seats, dual exhausts, stiff suspension, heavy-duty brakes, and a 150 mph speedometer. The TorqueFlite automatic transmission was standard and Bumble Bee stripes (or bodyside stripes) were no-cost options. R/Ts also added a special “power bulge” hood with simulated air vents. Just 94 Coronet R/Ts with four speeds and 136 with TorqueFlite were ordered. Just one manual and eight automatic Hemi Coronet convertibles were produced. Imagine their value today! Hemi cars had a special heavy-duty suspension, but air conditioning was not available.

Comments: The big news for 1969 was the addition of a new optional engine, the 440 Six Pack. The new engine was created by taking the existing 440 and replacing the single four barrel carb with three two barrel carbs. The new engine was rated at a stout 390 bhp. The new engine also received a fiberglass performance hood. Available on other Coronet R/Ts was a Ramcharger fresh-air induction system (standard on Hemis) with twin hood scoops, plus a wide choice of rear axle ratios. Styling was similar to 1968 except that the previous front fender medallion became a large decal that appeared as part of the rear bumblebee stripe. The 440 four barrel remained standard on the Coronet R/Ts. The Hemi was just another $418 more. Only 96 two door hardtops (58 with four speeds) and 10 convertibles (6 with TorqueFlite) were built with the Hemi.

Comments: The Dodge Coronet R/T received all new front sheet metal for 1970, including a smooth split grille which tapered towards the center. Dummy rear fender scoops were now standard and wore R/T badges (repeated on the nose and between the segmented, tapering taillamps). A bumblebee stripe circled the rear. Engines were the same as before, with the Hemi an additional $718 more. But low sales made 1970 the last year for the R/T and the convertible. Only 14 Hemi Coronet R/Ts were built, 12 hardtops and just two convertibles. From 1971 on, the Coronet was only available as a four door sedan or station wagon.