The Oldsmobile Toronado was a bold idea combined with intriguing styling. It was the first attempt to apply front-wheel drive to a full-size American car since the mid 1930s Cord, and is one of the most desirable Oldsmobiles ever produced. But the Toronado was definitely a muscle car in spirit, with its standard big cube V8 and dynamic styling. 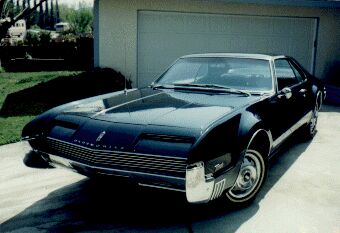 Comments: The Oldsmobile Toronado debuted in 1966 as the largest front wheel drive car ever and the first American fullsize front wheel drive car since the 1930s Cord. With a 119 inch wheelbase and weighing in at 4,366 pounds, the Toronado was no sports car. But with a standard 425 cid V8 rated at 385 bhp and aggressive styling, the Toronado could perform on the street. The drive system featured a split transmission with the torque converter behind the V8 engine and the gearbox located remotely under its left cylinder bank. This arrangement allowed the heavy engine to sit over the front wheels, which resulted in a favorable weight distribution (54%/46% front/rear) for such a large FWD car. The styling was executed by GM design chief William L. Mitchell and was exquisite. Design features included jutting front fenders, hidden headlamps, muscularly flared wheel arches, and a cropped tail trailing a smooth fastback roofline. All this combined to make the Toronado the winner of the Motor Trend Car of the Year Award. 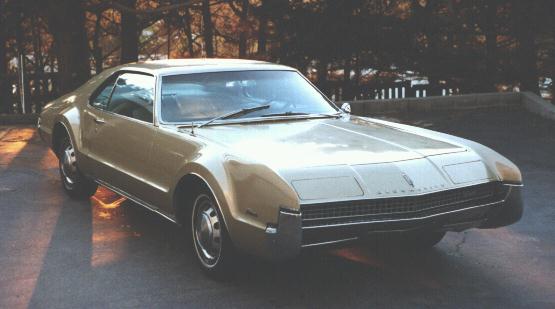 Comments: The Toronado received only minor changes in 1967 which included a new egg crate grille which replaced the previous year’s slat style grille. 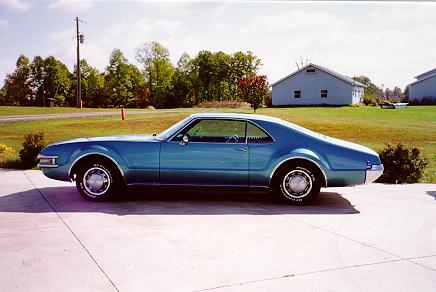 Comments: The Toronado received a few styling changes for 1968 which made it more “formal” and thus less distinctive. These changes included a bolder front end which now incorporated Oldsmobile’s hallmark split grille, and less prominent jutting front fenders. The big news was under the hood, where a new 455 cubic inch V8 rated at 375 bhp was now standard. 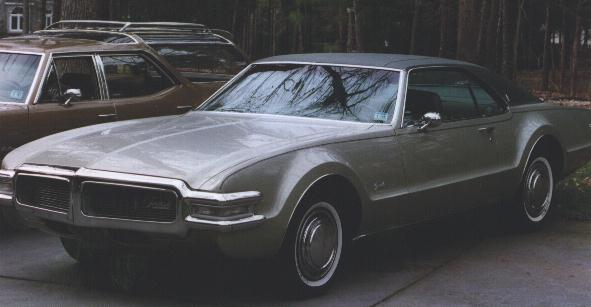 Comments: 1969 saw another restyle which added a longer tail to visually balance the long front. Unfortunately, a new vinyl top was now optional, which visually ruined the unbroken line from the C-pillar to lower body. 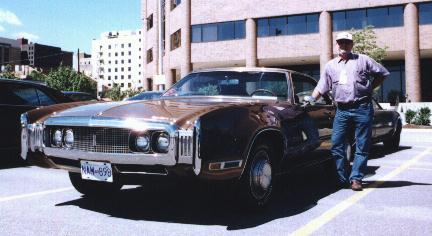 Comments: 1970 was the last year of the 1st generation Toronados which featured fixed headlamps, instead of the concealed headlamps of years’ past (some owners had complained that the concealed headlamps acted up on earlier models). New this year was an available GT version of the Toronado. The Toronado GT featured a 455 V8 rated at 400 bhp, instead of the standard 375 bhp found in the base Toronado. In addition, the GT also had a special cam and torque converter which further helped acceleration times. Visually, the GT featured dual exhausts with a notched rear bumper, nugget gold metallic paint with black wheel arch pin-stripes and a GT hood badge.

Comments: 1971 was the first year of the second generation Toronado. The all new design stressed luxury over performance and the Toronado’s contribution to the muscle car era had ended. 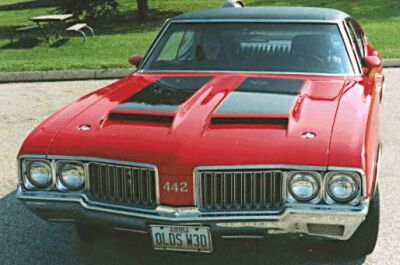