by musclecarclub
in Muscle Cars, Plymouth
0 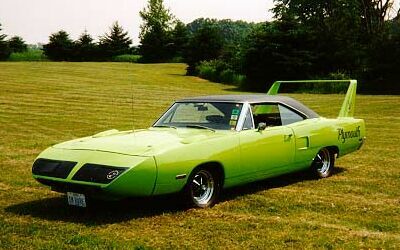 Introduction: The Plymouth Superbird was created for the same reason as the Dodge Daytona — a full on high speed race machine designed for the NASCAR races, but available to the public.

Comments: Trying to capture some of the success that their Dodge brothers had in 1969 with their Daytona, Plymouth tried the same thing in 1970 with their creation, the Plymouth Superbird. Although similar in appearance, the Superbird was actually quite different from the Daytona. The Superbird was based on the Plymouth Road Runner and the nose, airfoil, and basic sheet metal was different between the Daytona and Superbird. The special nose added 19 inches to the overall length (the Daytona’s was 18 inches), and the trunk spoiler was more angled and higher than the Daytonas. On both models, the spoiler was two feet high so that the owner could open the trunk. Although it created quite an impression on the street, the wing did almost no aerodynamic good under 90 mph.

NASCAR only required 500 copies to be built in 1969, but in 1970, NASCAR required a manufacturer to build one unit per dealer. In the end, Plymouth built a total of 1,920 Superbirds. Superbirds were available with three different engines. The most popular was the basic Super Commando 440 V8 with a single four barrel carb rated at 375 bhp. Next up was the 440 Six Pack rated at 390 bhp. At the top, and ordered by just 93 buyers, was the mighty 426 Hemi, rated at 425 bhp. Despite the success of the Superbird on the tracks, 1970 would be the only year it was made.