by musclecarclub
in Muscle Cars, Plymouth
0

Introduction: Although there had been numerous performance Plymouths, it wasn’t until 1967 that Plymouth offered one model with all the necessary performance goodies standard, the 1967 Plymouth Belvedere GTX. Positioned as Plymouth’s “gentlemen’s” hot rod, the GTX offered stylish performance for the discriminating buyer.

Comments: The Plymouth Belvedere GTX was introduced in 1967 as Plymouth’s first unified performance model. Based on Plymouth’s stylish two-door Belvedere hardtop and convertible, the Belvedere GTX received a special grille and tail panel, simulated hood scoops, and “pit stop” chrome gas cap. Twin racing stripes were optional. The GTX boasted superb handling, thanks to standard six-leaf rear springs, heavy duty shocks, torsion bars, and ball joints, though many believed that the power steering was over assisted. Disc brakes were optional, though didn’t seem to provide much advantage over the standard drum brakes. The interior was pure luxury, with bucket seats, embossed vinyl, and lots of brightwork.

To make sure the GTX had the necessary firepower to back up its performance image, Plymouth made the mighty 440 cid V8 (which Plymouth called the “Super Commando 440”) rated at 375 bhp standard. This engine was usually used for Chysler’s big cars but was tuned for more high-rpm performance with a revised camshaft and valve train, and free-flowing intake and exhaust systems. Optional was MOPAR’s mighty 426 Hemi, rated at 425 bhp. Only 720 buyers forked over the extra $546 for the Hemi. Although the 440 could keep up with the Hemi up to 70 mph, the Hemi was truly dominant on the drag strip. The standard transmission was MOPAR’s three-speed automatic transmission. A four speed manual transmission was optional, and included a larger ring gear, double-breaker distributor, free wheeling fan, and an oil-pan windage tray.

For those that wanted even more performance than a Hemi-powered GTX, Plymouth quietly offered a R023 version (Standard Belvederes were RH23 and GTX’s were RS23 – Dodge had a similar high-performance version called W023) of the Hemi GTX. Called the “Super Stock” version, the R023 was not marketed by Plymouth and only serious racers would have heard of it or even consider ordering it. The R023 GTX was notable for what it didn’t have. The hubcaps, radio, heater, body insulation, and even the carpet pad and sealers were removed to save weight – several hundred pounds in fact.

Although their stripped appearance made them look more like a Plymouth Belvedere, they kept their GTX badges. Under the hood was the familiar 426 Hemi, hand-modified for performance with the addition of a transistorized ignition and a dual-point distributor with no vacuum advance, metal core-plug wires, Carter 4139 and 4140 Carbs, and a free-air system that sealed the breather to the underside of the hood – which made the big, wide hood scoop fully functional. Plymouth rated this heavily massaged Hemi at the same 425 bhp rating as the normal Hemi. The original Hemi was underrated to begin with. Plymouth built only 55 R023 GTX’s, making them quite rare today.

Comments: In 1968, the GTX was moved upscale with the addition of the budget Plymouth Road Runner. Both shared the same redesigned Belvedere platform. Styling changes included a new hood design with different non-functional hood vents, a new grille, and revised taillights. In keeping with its upscale image, the GTX was available as either a two door hardtop or convertible, whereas the Road Runner was only available as a pillared coupe.

The Road Runner came with a strengthen 383 cid V8 as standard. In comparison, the GTX came with the 440 V8 standard. Both had the mighty 426 Hemi as the only engine option. Both cars had similar suspension upgrades, and wide-oval tires; front disc brakes and a limited slip differential were options on both. Non-functional hood vents were common to both.

The GTX came with the TorqueFlite automatic transmission as standard (it cost $206 extra on the Road Runner), with a four speed manual transmission as a no cost option. Instead of the plain exterior of the Road Runner, the GTX looked upscale with standard chrome wheel-lip moldings, tailpanel brightwork, and double side stripes. Inside, whereas the Road Runner had a fleet-grade interior, the GTX came with the well-appointed Sport Satellite cabin featuring shiny details and fake woodgrain. These differences were reflected in the base prices, $3,034 for the Road Runner pillared coupe and $3,355 for the GTX hardtop.

Serious racers loved the Hemi, but only 450 GTXs (414 hardtops and 36 convertibles) were ordered with the $564 option. The 440 was easier to tune, and churned out a surplus of low-end torque. That made it more useable on the street than the rev-happy Hemi. Deficiencies mirrored those of the Road Runner and most muscle car intermediates — a stiff ride, over assisted power steering, and unsure handling on rough roads. But overall, the GTX was a true gentleman’s super car.

Comments: The Road Runner gained a convertible and two door hardtop for 1969, which hurt GTX sales. The GTX received minor front and rear cosmetic changes. These included new rectangular side markers, and a new (but very similar) grille and taillight treatment. On the performance side, the GTX was now available with a wider choice of rear axles, and a Hurst shifter. Also new was the Air Grabber option, which consisted of dual air intakes in the hood with a dash-controlled shut off.

Comments: The 1970 GTX received new smoother lines, but lost its convertible model. The new styling featured a power bulge hood and non-functional rear brake scoops. Optional 15×7 Rallye wheels with F60-15 Goodyear tires became available for the first time. Under the hood, buyers could choose from a 440 with 375 bhp (the same as the year before, but with a lower compression ratio), the 440+6 with 390 bhp and the 426 Hemi rated at 425 bhp.

Optional with the 440+6, and standard with the Hemi was the latest version of the Air Grabber hood, which featured a single flap which could be raised or lowered from inside the car. Typical of the time, the flap featured a shark decal on the side, just the thing for psyching out the competition at the stoplight. But the GTX was always heavier than the Road Runner and thus it was slower. Sales continued to suffer and only 7,748 GTXs were sold. Only 72 were ordered with the Hemi and 768 with the 440+6. 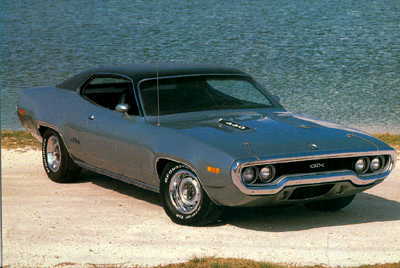 Comments: As somewhat of a surprise, the GTX returned for 1971. It was slightly smaller than the year before, and rode on a wheelbase one inch shorter at 115 inches. Its new styling was curvaceous and very attractive, The fuselage styling featured rounded fenders and a loop bumper front and rear. A new hood with cutouts was standard and a revised Air Grabber was optional. The windshield wipers were now hidden and the side markers were larger. The GTX also received a wider rear track to improve handling.

Under the hood, the GTX was not watered down like some of its competitors. It still came with its 440 standard (though down 5 bhp to 370 bhp) and the 440+6 and Hemi were still optional. Sales were down to just 2,942 units (only 30 with the Hemi). This would spell the end of the GTX, and the Hemi engine. The GTX would reappear as an option on the Road Runner for 1972.