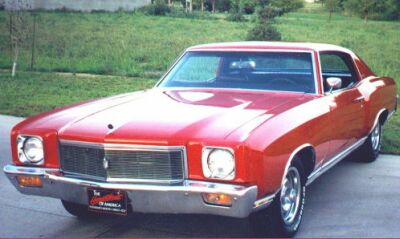 Introduction: The Chevrolet Monte Carlo was introduced in 1970 at the height of GM muscle car power. Positioned as a personal luxury car, the Monte Carlo competed against the Pontiac Grand Prix and Buick Riviera for the gentlemen’s performance market. However, right after its introduction, performance fell out of favor in Detroit and its short life as a muscle car ended almost as soon as it began. 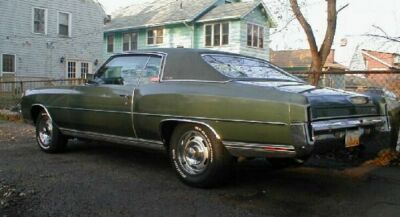 Comments: The 1970 Monte Carlo was introduced on September 18, 1969, but drew only a cool reception from enthusiast magazines who were still caught up in muscle car mania. But the Monte Carlo, which was only available as a four person luxury two door coupe, was a hit with buyers, who snatched up 145,975 examples. Monte Carlos were based on the Chevelle but rode on an 116 inch wheelbase and had the longest hood ever fitted onto a Chevrolet. All Monte Carlos came with at least a 350 cubic inch V8, but any big block Chevelle engine was available. At the top was the Monte Carlo SS454, which 3,823 buyers snatched up, which came with the mighty Chevy 454 block. The SS45 package, option Z20, included the 454 big block engine, a heavy duty suspension, “SS454” badging on the rocker panels and deck lid, a remote control sport mirror, thin black rocker panel stripes, heavy-duty battery, automatic level control suspension, air shocks, dual chrome exhaust extensions, 15×7 inch Rally wheels, and GTO-15B white stripe tires. The vast majority of the SS454 came with the LS-5 454 engine, rated at 350 bhp. But about 10 were snuck out of the factory with the LS-6 454 engine, rated at 450 bhp. A very few four speed Monte Carlo SS454s were made too. 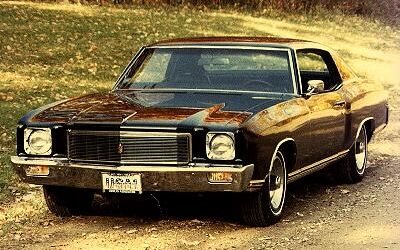 Comments: For 1971, a blacked-out rear body panel was added to the SS package, along with a heavy-duty front and rear suspension, front and rear stabilizer bars and dash control knobs with international symbols. Some, but not all, had a new rubber rear bumper insert. Despite falling horsepower ratings for other GM motors in 1971, the LS-5 454 actually was rated at 365 bhp, an increase of 5 bhp. A handful of Monte Carlos were ordered with the LS-6 454, down rated to “only” 425 bhp. 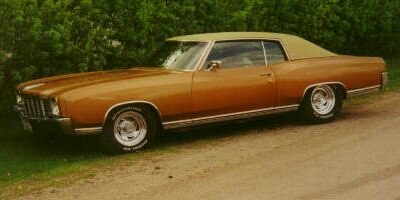