by musclecarclub
in Ford, Muscle Cars
0

The Ford Thunderbird was Ford’s answer to the Chevrolet Corvette. But whereas the Corvette never strayed far from its two seat sports car concept, the Thunderbird would soon add a hardtop coupe version, a back seat, and even two more doors as the do-everything personal car for Ford over the years. But it always provided decent performance along with a dash of style. 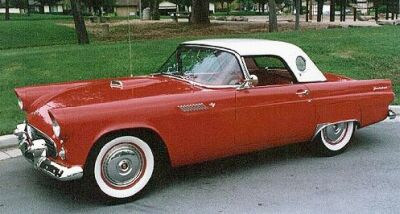 Comments: The Ford Thunderbird debuted in 1955 as Ford’s entry into the two seat sports car created by the Chevrolet Corvette. The Thunderbird was always about style, and the clean styling, creature comforts, and V8 refinement made it a sales success. The Thunderbird was only available as a convertible, but a distinctive removeable hardtop with circular portholes was available and was a popular option. 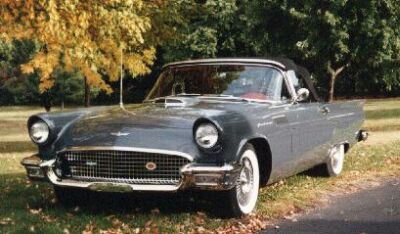 Comments: Ford finally got serious about performance with the 1957 Thunderbird, the last year of the first generation and the last two seat Thunderbird. New versions of the 312 Y-block V8 were offered that provided serious performance. The E-code 312 V8 featured two four-barrel carbs and was rated at 270 bhp. The F-code 312 V8 featured a single four-barrel carb force fed by a Paxton-built McCulloch centrifugal supercharger. The F-code engine was rated at 300 bhp, or at 340 bhp with the optional NASCAR “racing kit.” But these performance options would disappear after February 1957 when the Automobile Manufacturers Association (AMA) decided to end Detroit’s horsepower war. In addition to the boost in power, the 1957 Ford Thunderbird received a minor facelift which resulted in what many fans feel is the most stylish Thunderbird of all time.

Comments: The 1958 Ford Thunderbird represented the first year of the second generation and the first of the four seat Thunderbird, which marked the end of the two seater (which would not reappear until 2002). The new second generation Thunderbird featured four seats and an available hardtop coupe version along with the convertible. The distinctive styling featured boxy lines and a wide-pillar roof, which earned the second generation Thunderbirds the nickname “Squarebirds,” and would later spread to all Ford models. The new Thunderbirds also featured several innovations including unit construction, low build, and pioneered the buckets and console interior that established the personal luxury (and later muscle car) concept. A retractable hardtop was planned, but was shelved after the Skyliner experience. Engine choices were all new, with the elimination of the high performance 312 V8s but the addition of a larger 352 V8.

Comments: The big news for 1959 was the addition of a Lincoln 430 cid V8 rated at 350 bhp. Sales increased tremendously. 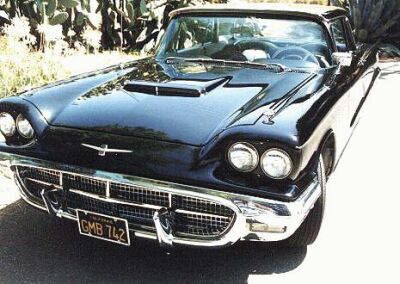 Comments: 1960 was the last year of the second generation Thunderbirds. A special “Golden Edition” hardtop was also available as well as the country’s first postwar sliding steel sunroof (about 2,500 built). 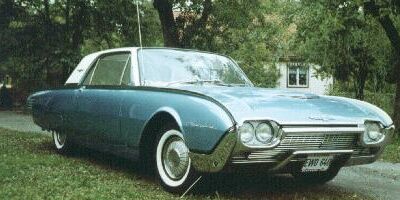 Comments: 1961 was the first year of the third generation Thunderbirds which featured all new exterior styling that earned it the nickname “Projectile Birds”. Chassis design was carried over, but was reworked slightly for a smoother ride and better handling. The exterior styling featured a severely pointed front “prow,” modest fins above huge renditions of Ford’s traditional round tail-lights, and softer roof contours on hardtops. The cowl was shared with the Lincoln Continental, and there was soom similarity in the styling of the grille and the quad headlamps receased in oblong housings. The interior design featured a dash which curved at its outboardends to blend in with the door panels, and the first “Swing Away” steering wheel, which would swing to the side when the car was in park and the door was opened to help facilitate entry and exit. The only engine available was the 390 cid V8, rated at 300 bhp.

Comments: 1962 saw the return of the two seat Thunderbird — sort of. Actually, drawing upon aftermarket units, Ford introduced the Sports Roadster package which featured a fiberglass tonneau cover, designed by Bud Kaufman, that covered the rear seat and transformed the four seat Thunderbird into a two seat roadster. The tonneau cover featured twin headrests and were raised so as to flow back to the rear, thus avoiding a too-flat appearance. The convertible top could still operate even with the tonneau cover in place, which was good because the top was difficult to install and remove. The Sports Roadster package also included a dash-mounted grab bar for the passenger and four dazzling Kelsey-Hayes wire wheels. The rear fender skirts were deleted to allow clearance for their knock-off centers. Although a stylish idea (usually attributed to Lee Iacocca), its high price, and cumbersome installation limited its sales. For performance fans, Ford offered a special “M-code” 390 cid FE V8 rated at 340 bhp. It featured three Holley two-barrel carbs and an aluminum manifold which kept the carbs level and at the same height. Only 145 Thunderbirds were built with the M code option, including 120 Sports Roadsters.

Comments: The Thunderbird was carried over for 1963, with the Sports Roadster and M-code 390 engine still available. A new option was a new Landau hardtop with simulated top irons on its rear roof panels which would set a Thunderbird styling gimmick that would continue for years Only 55 M-code Thunderbirds were sold in 1963, including 37 Sports Roadsters.