Introduction: A predecessor to the muscle car era, the Galaxie was Ford’s full size competitor. Although it out powered the similar Chevy Impala at first, it never sold as well do to its uninspired styling, poor aerodynamics, and heavy weight. Ford kept trying though and continued to install larger and larger engines, reaching a pinnacle with the most powerful engine Detroit ever made, the Cammer 427. Producing 657bhp, this engine was installed in only a few copies as it was almost impossible to drive on the street and was later banned by NASCAR, promoting Ford to stop production. Most street racers had to rely on the Ford 427 engines. 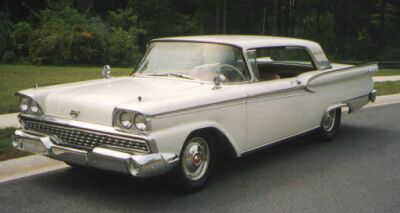 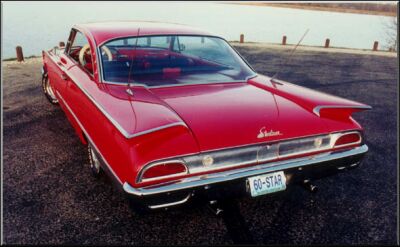 Comments: 1960 saw the dawn of a new era where performance was not the dirty word as it has been. Ford’s fullsize Ford, however, still only had a 352 V8 with 300 bhp as its top engine option, the same since 1958. The fullsize Fords were bigger than ever for 1960. Wheelbase was up an inch to 119 inches, overall length grew by 5.7 inches to 213.7 inches and overall width increased by 3.9 inches to the widest ever at 81.5 inches, a full 1.5 inches wider than federal highway standards allowed. Styling departed from the popular but conservative 1959 models and included grille-mounted headlights and gull wing fins. Topping the line was the sleek Starliner two-door hardtop and its convertible counterpart, the Sunliner. Both were technically in the Galaxie Special series and came with six cylinder or a number of eight cylinder engines. But Ford jumped on the performance band wagon with the introduction of its 352 cid Thunderbird Super V-8 that put out a respectable 360 bhp. Available on any fullsize 1960 model, it was also known as the Interceptor and Super Interceptor and carried the R code. It was not initially available with the Cruise-O-Matic, but rather the Borg-Warner T-85 three-speed, with or without overdrive. A Holley 540-cfm four-barrel carburetor, aluminum intake manifold, new cast iron exhaust headers, cast nodular crank, solid lifters, 10.6:1 compression ratio and dual point ignition certainly helped. 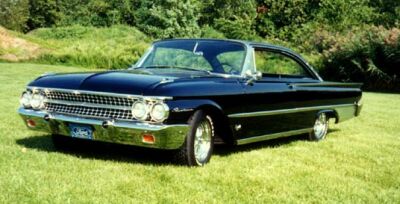 Comments: Ford got serious with performance for 1961, and released a new 390 cid V8 at the start of the year and a four-speed transmission at the end. In 1960, Ford announced that it had withdrawn support for the Automobile Manufacturers Association’s (AMA) four year ban on stock car racing and promptly showed up at the Daytona Motor Speedway with a 360 bhp engined Galaxie Starliner that ran 40 laps at an average of 142 mph. The new for ’61 Starliner was smaller sized, but bigger engined. Three versions of the 390 cid engine were available. The base engine came with 300 bhp, while a police version came with 330 bhp. At the top was the 375 bhp Thunderbird Super edition with a four-barrel carb. At mid-year, Ford released a triple two-barrel carb version of the 390 which put out up to 401 bhp. But despite the fact that Ford had the most powerful engine available, it was lost in the excitement of Chevrolet’s 409. The Ford 390 V8 put out 375 bhp, and eventually 401 bhp, which was more than the 360 bhp that the Chevy 409 could put out. But the Chevy’s extra 19 cubic inches made it a hit on the street. 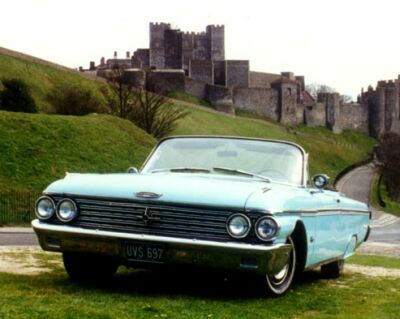 Comments: Bowing to the supremacy of cubic inches on the street, Ford abandoned its 390 engine and introduced a brand new 406 cid V8, which it called the Thunderbird 406, even though it was never available in the Ford Thunderbird. The 406 came either with a single four barrel Holley carb rated at 385 bhp or three Holley dual-barrel carbs rated at 405 bhp. With just under 1 bhp per cubic inch, Ford found itself unable to match Chevy’s improved 409 cid V8, which produced 409 bhp. The Ford 406 engine went into the big and heavy full-size Galaxies, and later in the Galaxie 500 and 500 XL which were introduced in mid 1962. The 406 came as a package that included four on the floor manual transmission, a number of optional low-ratio axles, 15 inch diameter wheels instead of the standard 14 inchers fitted to regular Galaxies, fade-resistant drum brakes, high capacity radiator, and a collection of heavy-duty suspension pieces. Both versions of the 406 had 11.4:1 compression and cast-in headers that led to low-restriction dual exhausts. Ford’s Borg-Warner four-speed manual was mandatory and axle ratios as high as 4.11:1 could replace the standard 3.50:1 cog.

Although a Galaxie did well in initial acceleration, its heavy weight and poor aerodynamics counted against it and the best it could do was quarter miles in the high 15s. The new restyled roofline of the 1962 Galaxie’s created more drag than the 1961’s. To improve the Galaxie’s showing in NASCAR, Ford attempted to improve the Galaxie’s aerodynamics by offering several options on the production versions. First they announced a “Starlift” detachable hardtop for the Galaxie Sunliner convertible which would improve overall aerodynamics. NASCAR refused to accept Ford’s argument that this was a regular production option and refused to allow the Galaxie’s to race with them. Ford then announced the availability of weight saving aluminum bumpers and fiberglass body panels for the Galaxies, but again NASCAR refused to accept them as production options. As a result, the light weight Galaxies were forced to run in the Factory Experimental Class, were they did not gather the publicity that Ford wanted. Although the 406 powered Galaxies did not capture the publicity that Ford wanted, it was a good attempt none the less. The top of the line Galaxie 500 XL had bucket seats and a center console, which were becoming more important in the high performance market. Complimenting this increased performance was some of the cleanest styling available in 1962. 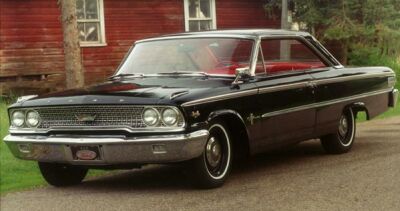 Comments: Ford rebounded from its poor showing in 1962 to win 23 Grand National NASCAR races, including the top five places at Daytona. This success was due to two factors, both introduced mid way through the 1963 model year (1963 1/2 according to Ford). The first was a new sleek Sports Roof body for the two door Galaxie, which was two inches lower than the regular hardtop and offered better aerodynamics. The second were two new engines that replaced the 406, known as the Ford 427. The Ford 427 was a big bore development of the 406 and actually displaced 425 cubic inches, but Ford called it a 427 anyway to play on NASCAR’s maximum engine size restriction. The new engine had a light weight valve train with solid lifters which improved high revs, while bottom-end strength was taken care of by cross-bolted main bearing caps. With a single 780-cfm four-barrel Holley carburetor, the Ford 427 was rated at 410 bhp at 5,600 rpm and cost an extra $406. Outfitted with two 652-cfm four-barrel Holley carbs, it put at 425 bhp at 6,000 rpm and cost an extra $462. A four speed manual was a mandatory $188 option. Both 427s came with 11.5:1 compression, an aluminum manifold, and performance packages which included heavy-duty suspensions, axles, and brakes, together with uprated driveshafts and universal joints. All high performance Galaxies came with 15 inch wheels, as opposed to the standard 14 inchers. But the Galaxies were still heavy, weighing between 3,500 and 4,000 lbs. and although they did well on high speed tracks, they lagged behind on the drag strips and on the streets. To counter this, Ford built 50 special light weight Sports Roof Galaxies for competition. They had stripped interiors, ultra-lightweight bucket seats, together with aluminum transmission casings and bell-housings. Fiberglass was used for the bumpers, front fenders, and the “bubble” hood which was necessary to clear a special aluminum high-rise manifold. Some cars even had fiberglass doors. With the 425 bhp 427 engine, these lightweights were able to turn the quarter mile in 12.07 seconds at 118 mph. However, they were outgunned on the streets by hot Chevys, Dodges, and Plymouths, where it counted. 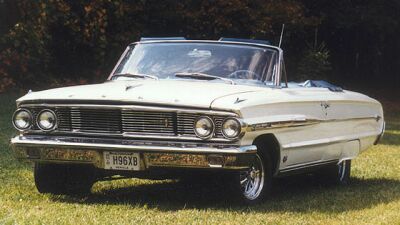 Comments: The fullsize Galaxies were restyled for 1964, and the sleek fastback roof was carried over along with the 427 engine. Newly available was an optional High-Riser manifold. Also new was a “high rev” package. They still dominated the high speed NASCAR races, but their heavy weight hurt them on the drag strips and the street. 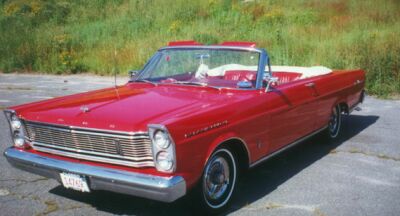 Comments: The Galaxies were remodeled for 1965, with sharper styling creases and stacked headlights, and sported a redesigned and tougher front suspension. A new heavy duty “nine inch” differential could be ordered as an option. But the real news came in mid season with the introduction of two new engines. The less powerful was the Thunderbird 427 Super High Performance V8, which was a development of the existing 427. Maximum power was unchanged, but competition durability had been improved by means of a large oil gallery low down on the left-hand side of the block, which gave lubrication. With a single four barrel carb, it produced 410 bhp. With dual four barrels, it produced 425 bhp. The so-called “side oiler” engine in the Galaxies was nevertheless overshadowed by the “cammer.”

The “cammer” 427 was in 1965, and probably remains till today, the most powerful production engine ever made. Developed with the intention of taking on Chrysler’s Hemis, Ford gave the 427 block new heads with hemispherical combustion chambers. To cap that, they fitted overhead camshafts — one per cylinder bank — which gave the engine its name. With the regular single four barrel carb, the “cammer” put out 616 bhp, but with dual four-barrels, it produced a massive 657 bhp. With this kind of power, the “cammer” 427 was totally unsuitable for street use. This kept sales and therefore production volumes down and NASCAR refused to accept the engine as a regular production option. Nonetheless, Ford gained a lot of publicity in other events which greatly helped their image on the street.

Comments: Despite the publicity earned by the Ford “Cammer 427”, enthusiasts were quick to realize that the engine was not available in the real world so it didn’t have much of an impact on the street. Only 237 Fords with the 427 engine were sold in 1966. Realizing that the days of full size muscle cars was over, Ford replaced its high performance 427 V8 with 425 bhp with a new 428 V8 with only 345 bhp that was tuned more for smoothness than power. Promoted as the new “7-litre” model, the top line 428 powered Galaxie was tuned more for smoothness than power which signaled the end of fullsize Ford power.

Comments: Ford began to stress big car luxury in 1967 which meant more size and weight, but less emphasis on muscle. Although technically the two 427 engines were offered, most buyers opted for the less expensive 428 if they wanted cubic inches. The “7 litre” was demoted from full model line status to optional sport package in 1967. Priced at $515.86, the “7-Litre Sport Package” included the 345 bhp 428 cid V8 with a C6 automatic, power front disc brakes, and the bucket seat XL interior with a sport steering wheel. Few buyers noticed as only 50 7-Litres were built in 1967. 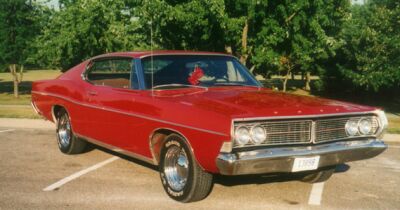 Comments: Ford fullsize performance suffered again with the drop of the 425 bhp 427 cubic inch engine – not that anyone noticed. New this year was the top of the line Galaxie XL GT. The GT package was priced at $204.64, and included a heavy-duty suspension, power front discs, low-restriction dual exhausts, wide-oval rubber, mag-type wheel covers, GT badges, and special body side “C-stripes.” A 390 cid V8 was the standard power source, but a 428 cid V8 was optional. The GT package separated performance Galaxies from the XL series which no longer came with standard bucket seats and V-8 power.

Comments: For 1969, the Ford Galaxie sported a new sleek SportsRoof fastback body style with a recessed rear window and hideaway headlights. In base form, a ’69 XL GT was powered by a 265 bhp 390 cid V8 with a two barrel carb. Available at extra cost were two 429 cid V8s, one with a two-barrel carb rated at 320 bhp and another with a four-barrel carb rated at 360 bhp and 480 lb-ft. The Ford Galaxie needed that power just to move its 4,135 pounds of weight.