Introduction: The Dodge Charger was a response to the fastback fad started by the Mustang and the Barracuda, but on a much larger scale. Based on the midsize Dodge Coronet model, the Charger was launched in 1966 and quickly became a sales hit with its dramatic fuselage styling of 1968. From the beginning, it packed serious muscle, from the 318 V8 to the all mighty 426 Hemi. Finally, the MOPAR street crowd had some serious midsize muscle to bring to the party.

Comments: Dodge waited until 1966 to join the fastback craze started by the Mustang and Barracuda, but it jumped in with some serious muscle that the others could only dream about. Based on the midsize Coronet platform, the Charger added an awkward fastback roofline (made better by sweeping C pillars), hidden headlamps, and a full length taillamps. The interior was state of the art with four bucket seats, available consoles in front and back, and full gauges. The rear bucket seats could even fold down to create a cargo area seven feet long. Under the hood, the Charger meant business. Standard was the 318 V8. Most buyers upgraded to the 383 V8. But the 1966 Charger also saw the debut of the most famous engine in musclecar history, the 426 Hemi. Although Hemi engines had been available in the 1950s and the 426 Hemi had been available since 1964, 1966 saw the debut of the street Hemi, the first Hemi that the average driver could use on the street. Advertised at 425bhp, it actual put out close to 500bhp (in street tune!) The Hemi added $1,000 to the $3,122 base price of the Charger, resulting in only 468 built out of a 1966 production run of 37,344 Chargers. Maybe that was because the Hemi came only with a 1 year/12,000 mile warranty instead of the standard 5 year/50,000 mile warranty. Furthermore, that warranty was void if the car was “subjected to any extreme operation (i.e. drag racing).” Heaven forbid.

Comments: 1967 saw the introduction of the 440 Magnum into the Dodge Charger lineup. Introduced as the standard engine in the R/T package, the 440 was Chrysler’s biggest engine and it put out 375bhp. It was cheaper than the Hemi, could keep up with it until about 60 mph, and was easier to tune and race on the street. But for serious racing, the Hemi was still king. 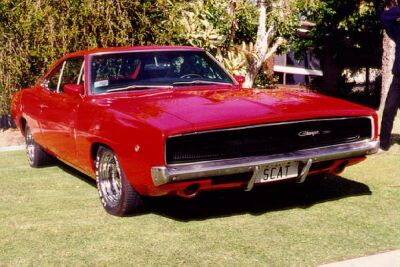 Comments: 1968 saw a dramatic redesign of the Dodge Charger with a new hidden headlight grille, curvy body, recessed backlight, refined tail, and minimal use of chrome. This redesign resulted in a six-fold increase in sales from 1967. Out of the 92,590 Chargers produced for 1968, 17,665 had the R/T package with its standard 440 Magnum engine and “Scat Pack” bumblebee stripes on the rear end. Only a scant 475 came with the all mighty Hemi. The Hemi was strengthened for 1968 with a slightly longer-duration cam, new valve springs, and revisions which reduced oil consumption. It was still under-rated at 425bhp and still remained the engine of choice for serious drag racers.

Comments: 1969 saw little change for the regular Dodge Charger. Instead, Dodge released two special versions of the Charger, in order to better compete in NASCAR. The first was the Charger 500, which was basically a 1968 Charger with improved aerodynamics. The Charger 500 had a flush mounted Coronet grille with a flush mounted rear window over the recessed backlight. Although the Charger 500 had some racing success, Dodge engineers felt they could do more. They went back to the wind tunnel and came back with the Dodge Charger Daytona, the most outrageous musclecar of the era. In front, the Daytona sported a pointed 18 inch nose extension which reduced drag and enhanced downforce. Out back, the Daytona retained the 500’s recessed backlight but added a horizontal tail stabilizer on tall vertical extensions (known as a “wing” in today’s lingo). The wing had to be tall enough on production versions in order to open the trunk and some dealers had to remove them in order to sell the cars. Priced at $4,000, the Daytonas were available with either the 440 or the 426 Hemi and 503 examples were eventually sold. Weighing almost 300 pounds more than regular Chargers with the same engines, the Daytona’s were hampered on the street. But they could top out at over 150 mph on the track — and it was completely street legal. This was truly the height of the performance mania.

Comments: 1970 saw another redesign of the Dodge Charger which now had a new chrome loop front bumper and a fresh full width taillamp housing. R/T versions gained a simulated reverse body scoop. Hip, young colors such as Plum Crazy and Go-Mango became available and a cool pistol-grip handle now topped the available four-speed shifter. Also available was the extra cost SE version with its leather upholstery and for the first time there was an available electric sliding sunroof. Performance buffs cheered at the addition of a new engine choice, the 440 Six Pack. Slotted between the 440 Magnum and the Hemi, the 440 Six Pack traded in the 440’s 4 barrel carburetor for 3 Holley two barrels, increasing the horsepower from 375 bhp to 390 bhp. The Hemi was also improved, with the addition of hydraulic lifters, instead of solid tappets. Still, rising insurance costs took their toll and only 10,337 R/Ts were sold in 1970. Of these a mere 116 were 440 Six Packs and only 42 were Hemis.

Comments: 1971 was the beginning of the end of the musclecar era. While other manufacturer’s were decreasing their engine ratings, Chrysler held on as long as it could. The Hemi retained its 425bhp rating while the 440 lost 5bhp to 370bhp and the 440 Six Pack lost 5bhp to 385bhp. The redesigned 1971 Charger lost two inches of wheelbase and gained swoopy Coke bottle styling. It now shared its body with the Dodge Super Bee and was still available in R/T and SE trim. The R/T version was particularly bold with its standard blackout hood, simulated bodyside air extractors, Rallye wheels, tape stripes, and optional front and rear spoilers. The Hemi breathed through an Air Grabber type hood scoop activated by a dashboard switch. A full range of bold colors was available from “Green Go” to “Citron Yella.” This body style would last until 1974, but this would prove to be the last year for the 426 Hemi. Rather than see the Hemi strangled by emissions standards, Chrysler decided to retire it when it was still on top. 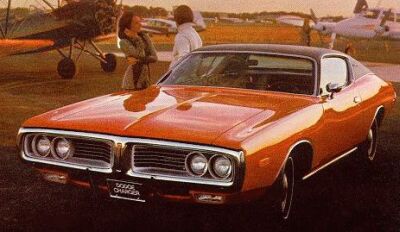 Comments: Starting in 1972, Chrysler had to detune its engines to meet ever stricter emissions laws. They also began to quote engine ratings in terms of net output (engine output with all accessories), rather than gross output. This lead to some dramatic “declines” in rated engine power. With the Hemi gone, the 440 Six Pack became the top engine choice. Its output dropped from 385bhp gross to 330bhp net. The regular 4 bbl 440 dropped from 370bhp gross to 280bhp net. The 383 was unable to meet the new emissions requirements and was dropped. A new 400 V8 which offered 255bhp net took its place. 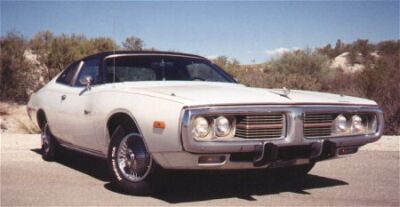 Comments: The 1974 Charger continued on with a 275bhp 440 as its top engine choice. This would be the last year that the Charger would be considered a performance vehicle as the 1975 Chargers would be repositioned in the personal luxury sector. Although the Charger name would grace several future Chysler models, none would ever match those of the muscle car era.